Courts of the Church 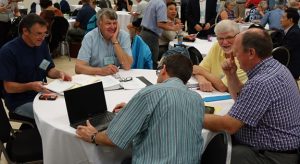 As one family under the lordship of Christ, Christian communities have organized themselves in a variety of ways to provide effective worship, pastoral care, discipleship, and service. While some Christians follow a model in which all decisions regarding theology and polity are decided by the individual congregation (congregational) and others abide by a hierarchical system of priests and bishops (episcopal), the Presbyterian form of government is based on eldership. Teaching elders (usually referred to as ministers or pastors) and ruling elders (usually referred to as elders) share in the care and oversight of the ministry of Christ at every level of our church.There are four “courts” in our presbyterian system. Most of the important decisions that affect the church are made as women and men prayerfully meet to discern the mind of Christ.

Sessions are made up of elders and minister(s)*. Elders are women and men who have been elected by the local congregation and ordained. The session provides for the overall ministry of the congregation, including pastoral care, worship, Christian education, stewardship, and mission. It has representation at the presbytery. The minister acts as the moderator.

*The term minister includes Minister of Word and Sacrament and Member of the Order of Diaconal Ministries.

Presbyteries support and oversee their congregations and ministers. While scheduling varies according to geography and need, presbyteries normally meet several times each year. The moderator may be a minister or an elder. There are 45 presbyteries in Canada.

Each synod is made up of several presbyteries and provides general supervision for them. Ministers and an equal number of elders make up the membership of this court. Some synods operate camps and offer educational and training events. Synods normally meet once a year. The moderator may be a minister or an elder. There are eight synods in Canada.

The General Assembly meets annually during the first full week of June. It is the highest decision-making body of our church. An equal number of ministers and elders are commissioned by presbyteries to attend. It votes on matters of theology and polity that affect the whole denomination. It receives, discusses, and makes decisions on reports from committees, petitions, overtures, references, and appeals. Its decisions are made carefully. Some issues require study over a number of years. The General Assembly elects a moderator, a minister or an elder, who presides over the Assembly and continues in an inspirational and ceremonial role for the following year.