Dr. James Naismith After graduating from Presbyterian College in Montreal, the young Presbyterian ministerial candidate decided he could have a greater impact through sports than he could in traditional congregational ministry. And how right he was!  While training to be a YMCA director in Springfield, Massachusetts, in 1891, Naismith was given a class assignment to invent a competitive, less violent alternative to such contact sports as boxing and rugby that could be played indoors during the cold, winter months. Naismith’s original name for his new game was “Box Ball,” but when all he could find were two old peach baskets to hang on the ten foot high railing that surrounded the gym, he changed the name to “Basket Ball.”  Years later there were attempts to rename the sport, “Naismith Ball,” but Naismith refused.  He went on to become the first basketball coach at the University of Kansas (ironically he is the only KU basketball coach to have a losing record) and lived to see basketball become an Olympic sport in 1936, three years before his death in 1939. Naismith himself awarded the medals, gold to the U.S. and silver to Canada. 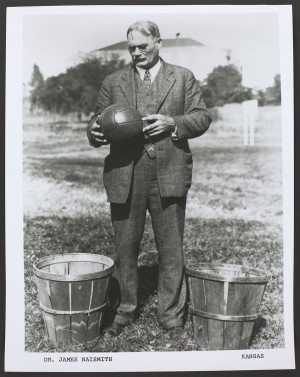 Naismith never patented his game; it was truly his gift to the world. As the inventor of basketball, the enduring impact of James Naismith is inestimable. Today basketball is the third most popular sport in the world, and even the President of the United States holds national news conferences when he fills out his basketball bracket for the NCAA Basketball Tournament held each March. Perhaps most importantly, the sport has brought together rich and poor and helped to overcome the racial barriers that separate us from one another. One will find basketball backboards in the driveways of the wealthiest homes and in the poorest neighbourhoods and ghettos, in public parks as well as the gymnasiums and parking lots of schools and churches and YMCA/YWCAs around the world. Many churches have used basketball as a means of reaching new generations of young people with a living experience of Christian community; indeed, the Chinese Presbyterian Church in Toronto began as a mission outreach to Chinese male immigrants to Canada in 1910, providing them with a place to live and a place to gather for recreation. They built a basketball court long before they built a sanctuary! 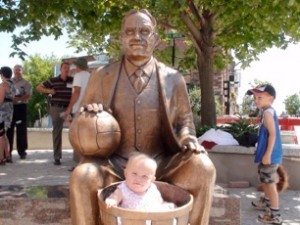 The James Naismith Foundation, established in 1989, maintains the Naismith Museum in Naismith’s hometown of Almonte, Ontario, and supports basketball programs in First Nations communities. And it all began with one Canadian Presbyterian who dreamed of bringing his love of Christ and love of sports together, and who could only find two old peach baskets to teach his new game of “Box Ball” to his gym class!