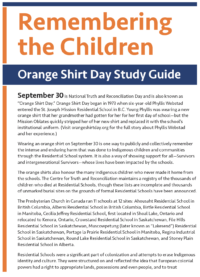 September 30 is National Truth and Reconciliation Day and is also known as “Orange Shirt Day.” Orange Shirt Day began in 1973 when six-year-old Phyllis Webstad entered the St. Joseph Mission Residential School in B.C. Young Phyllis was wearing a new orange shirt that her grandmother had gotten for her for her first day of school—but the Mission Oblates quickly stripped her of her new shirt and replaced it with the school’s institutional uniform. (Visit orangeshirtday.org for the full story about Phyllis Webstad and her experience.)

Wearing an orange shirt on September 30 is one way to publicly and collectively remember the intense and enduring harm that was done to Indigenous children and communities through the Residential School system. It is also a way of showing support for all—Survivors and intergenerational Survivors—whose lives have been impacted by the schools.

Residential Schools were a significant part of colonization and attempts to erase Indigenous identity and culture. They were structured on and reflected the idea that European colonial powers had a right to appropriate lands, possessions and even people, and to treat Indigenous people as undeserving of rights. The idea that European Christians were superior to non-Christian people was set out in a series of 15th century papal bulls (decrees) which are called the Doctrine of Discovery.

The racist belief in European Christian superiority underscored the process of colonization across the lands now called Canada and is seen in the establishment of laws, governments and societal norms that were based on European models—including within the church. While Canadian laws and government practices are changing over time, the long-term influence of racism and the beliefs that are articulated in the Doctrine of Discovery persist. This is painfully evident within the church through its complicity and participation in the Residential Schools system, the stated goal of which was the erasure of Indigenous identity and assimilation into “Canadian, Christian” society. While the church has formally repudiated the Doctrine of Discovery in response to the Truth and Reconciliation Commission’s Call to Action 46ii (A&P 2019, pp. 35, 368–377), and offered a confession for our role in running Residential Schools, it will take the efforts of every person in our church, and indeed across Canada, for the intergenerational harms of racism and genocide to be stopped and healed.

Wearing an orange shirt on September 30 each year will not itself end the harm from the ongoing legacy of Residential Schools. But when we wear orange shirts, talk to others about why we are wearing them, and participate in events and activities that support truth, healing and reconciliation, we help to create awareness of the individual, family and community inter-generational impacts of Residential Schools. We also witness to the truth that “Every Child Matters.” Doing so is one way among many needed to support healing.

In this six-minute video reflection from Vivian Ketchum, who originates from Wauzhushk Onigum Nation of Northern Ontario, and is a member of Place of Hope Presbyterian Church in Winnipeg, Manitoba, she talks about why she wears an orange shirt. Vivian is a Survivor of a Presbyterian-run Residential School (Cecilia Jeffrey) and she speaks about why it is important for members of the church to mark September 30. Take time to watch the video and really listen to what she has to say. You are encouraged to share her reflection with your church community as you mark this important national day, reflect on the church’s role, and seek ways to work for truth, reconciliation and healing.

After watching the video, consider these questions:

Prayer to Mark the National Day for Truth and Reconciliation

Creator, Healing God
On this National Day of Truth and Reconciliation
We lament all the childhoods and lives lost through the Residential School system; all the families broken and the communities wounded.
We pray for healing for all those harmed by the schools.
As a church we have repented for our role in running Residential Schools;
But we know repentance is only the beginning
Continue guiding your church to live out our confession and work for reconciliation.
Continue moving us to act, supporting justice for Indigenous people
Help your church hear how to walk the path of truth and reconciliation
And help all of us, always, to celebrate the hope and joy of every child.
Amen.