Highlights from the Final Day of General Assembly

Highlights from the Final Day of General Assembly 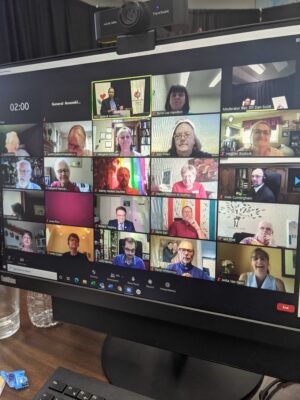 On the final day of the 2021 General Assembly, the Rev. Dr. Richard Topping, President and Vice Chancellor of Vancouver School of Theology (VST), preached on the stories in Hebrew 11 and the ordinary people who took a risk and changed their lives to follow God’s call. He saw a common denominator among God’s people through the ages—that they lived, worked, acted and spoke by faith. “My friends, let it be said that whatever the PCC does in this, our time, we do it by faith.”

The Moderator, the Rev. Dr. Daniel D. Scott, called the Assembly to order and constituted the court with prayer. He reflected on yesterday’s difficult and important decisions, recognized the hard work ahead and encouraged commissioners to fix their eyes on Jesus and “run with perseverance the race before us.”

The Assembly adopted all 55 recommendations in the Life and Mission Agency (LMA) report, which brings together reports from numerous sub-committees. In doing so, the Assembly:

The moderator will write letters to the Canadian government on justice-related issues including justice for Indigenous people, climate change, poverty reduction and gun violence.

The three theological colleges presented reports that included highlights from the past year and described how they adapted to deal with the impacts of the pandemic. The colleges mentioned that they incorporated environmental theology into their programs by integrating theological concerns for God’s creation into curriculum, guest lectures, publications and community life for faculty, staff and students.

Letters will be written to the Canadian Government encouraging:

Congregations are urged to learn more about these issues, join in efforts to advocate governments at all levels and implement actions as they can. The Social Action Hub will provide decisions, resources and letters from the moderator to support advocacy efforts. 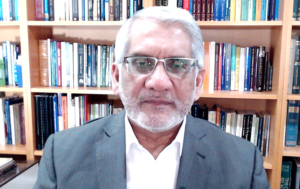 Imam Muneed Nasir , Co-Chair, National Muslim Christian Liaison Committee (NMCLC), explained that the NMCLC is a forum for respectful dialogue on things of common interest between Canadian Muslims and Christians to which the PCC is a valued participant.

Imam Nasir pointed out that we are at a unique moment in history. The pandemic has revealed pre-existing inequities and injustices in our country and the world, such as the climate crisis, social and racial inequities, and human rights injustices. We are being called to provide a religious and moral perspective on these important issues and build a more just and equitable world.

“History tells us that when our faith communities best model our teachings, we have been the greatest force for common good in the world. The ability to come together and build shared solutions has never been more important than now. Our future lies together, rather than apart. Our future lies at understanding the differences that we acknowledge and appreciate about each other. Not the differences that divide us.”

The moderator told Imam Nasir that the General Assembly approved a motion yesterday to send a letter of condolence to the National Muslim-Christian Liaison Committee following the attack in London, Ont., of a Muslim family. “We are standing with you in these difficult times,” said the moderator.

The Assembly recognized the Rev. Peter Bush for having completed over 30 years as editor of the Presbyterian History newsletter and awarded the following book prizes:

The Presbyterian Church Heritage Centre , formerly the National Presbyterian Museum, has relocated to Carlisle United Church in Carlisle, Ont., in the county of North Middlesex, and begun a national campaign to support the Centre.

The Assembly approved changes to the WMS’s constitution. The WMS reported that the fourth National Women’s Gathering is being organized for May 20–21, 2022. The WMS continues to give grants to various organizations and projects. In 2020, two new Together We Can! projects were started for Action Réfugiés Montréal and a new roof for the Graduate School for Nurses in Indore, India.

The Assembly passed the recommendations from the Committee on Church Doctrine report. These included:

The report highlighted efforts that ensured the ministries of the PCC continued during the COVID-19 pandemic and in light of the cancellation of the 2020 General Assembly. The Assembly approved their recommendations which included:

The Clerks of Assembly report deals primarily with matters of church governance. There were 20 recommendations, 12 of which were overture responses.

The Assembly adopted new guidelines to facilitate the implementation of Remit B and Remit C, and both same-sex marriage and the ordination of married LGBTQI ministers.

The Assembly approved using online election tools to identify a nominee for moderator, providing alternative arrangements for presbyters unable to vote online. The nominee would be placed before the Assembly for the final election as usual.

Pension and Benefits Board

The Pension and Benefits Board reported the financial status of the pension plan, results from the Asset Liability Management Study, responses to overtures and petitions, and updates on congregational assessments in arrears, group benefits and communications.

The going concern funded status of the plan held strong over the past year and the solvency (wind-up) position of the plan improved slightly due to better than expected investment returns and a slight increase in discount rates for calculating wind-up liabilities.

The Assembly adopted a series of recommendations to help the church move toward and ensure greater gender pay equity locally and across the denomination.

The Trustee Board reported that the Pension Fund and the Consolidated Fund weathered the market volatility in 2020 well. Returns for the past four- and 10-years rolling have been: Pension Fund 8.5% and 8.6%; Consolidated Fund 9.9% and 8.8%. In 2020, a total of $2,934,059 was derived from the sale of assets of dissolved congregations. An aggregate of $1,862,628 from such sales has been allocated to the Pension Solvency Fund since 2017, approaching the $2 million cumulative limit for that allocation under the formula most-recently adopted by the General Assembly.

The Atlantic Mission Society continued its ministry online during 2021–21. The Presbyterian Message was published nine times and financial support was given to Presbyterians Sharing, PWS&D, and local and regional mission work. They noted that while the way we do mission work is changing, we can continue to share God’s love with the world.

PCBC’s mandate was expanded in 2020 to consider assisting with church operating costs and housing loans for ministers due to the challenges presented by the pandemic. PCBC is encouraged by congregations looking to not only sustain their buildings for worship and church activities, but to reposition and restructure their spaces to meet the needs of their communities.

The Ecumenical and Interfaith Relations Committee reported on facilitating relationships between various national and international ecumenical councils and interfaith groups. An ecumenical highlight was the celebration of the 75th anniversary of the Canadian Council of Churches with a special worship service in September 2019 and a cross-country online event in October 2020.

The Young Adult Representatives prayed for the Assembly in English, French and Arabic. They prayed for unity in a fragmented world, gave thanks to God for safety and guidance, and thanked commissioners for having the courage to share their stories. They challenged the church not to let the rift between theological differences divide it, and reminded the church that the people of Christ are stronger together as one unified church in body and mind, bringing glory to God.

The General Assembly closed with worship.

Full details are found in the official minutes, available on the 2021 General Assembly web page.