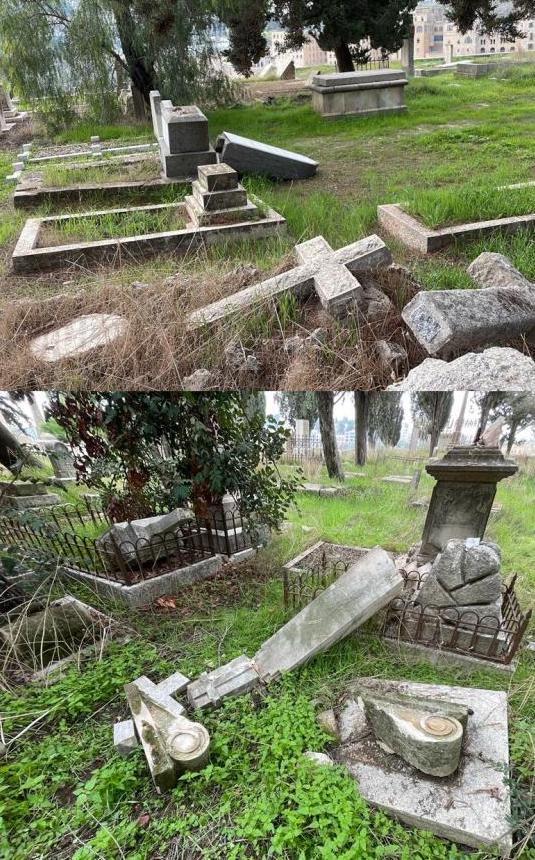 More than 30 graves were vandalized in the Protestant cemetery on Mount Zion in Jerusalem on January 1, 2023.

Rabbi Ephraim Mirvis, the Chief Rabbi of the United Hebrew Congregations of the Commonwealth , stated that, “This shameful vandalism is a disgraceful desecration for which I hope the perpetrators will be found and prosecuted to the fullest extent of the law.”

The Patriarchs and Heads of Churches of Jerusalem consider the act of vandalism by radical groups as “a systemic attempt to drive the Christian community out of Jerusalem and other parts of the Holy Land.” At the same time, the “local Christian community, while small [contributes disproportionately to] educational, health and humanitarian services in communities throughout Israel, Palestine and Jordan.”

The World Council of Churches (WCC) described the attack, which was captured on security footage, as an “unacceptable [and] demonstrated lack of respect for the dead and provocation of the Christian community.” The General Secretary of the WCC, the Rev. Prof. Dr. Jerry Pillay, joined the Episcopal Diocese of Jerusalem and all the churches of the Holy Land in condemning the attack, saying that the “incident serves to underscore concerns expressed repeatedly by the heads of churches in Jerusalem about increasing attacks and threats against the Christian community by extremist elements of Israeli society.”

The Presbyterian Church in Canada joins our voice with those who have forcefully condemned and spoken out against the vandalism and desecration. The Rev. Dr. Bob Faris, Moderator of the General Assembly, will be sending a letter to the appropriate bodies to express concern and to assure them of our church’s prayers and support.

Sarah Curd2023-01-06T15:25:53-05:00January 6th, 2023|Categories: News|Tags: PCConnect|Comments Off on Religious Leaders from Around the World Condemn Desecration of Historic Protestant Cemetery in Jerusalem