Click here to watch the recording of opening worship

The Rev. Michael Blair brought greetings from the United Church of Canada to the Moderator and commissioners of General Assembly. He expressed gratitude for the many ways our denominations work together, and for the many Presbyterians working in UCC ministry. He shared that the UCC has been engaged for the past year in a strategic planning process that has identified five strategic objectives: leadership, climate, justice, widening welcome and common good. In 2020, the UCC committed itself to be an anti-racist denomination and has been providing resources and exploring policies and practices to ensure they aren’t intentionally or unintentionally perpetuating racist attitudes, behaviours and practices. 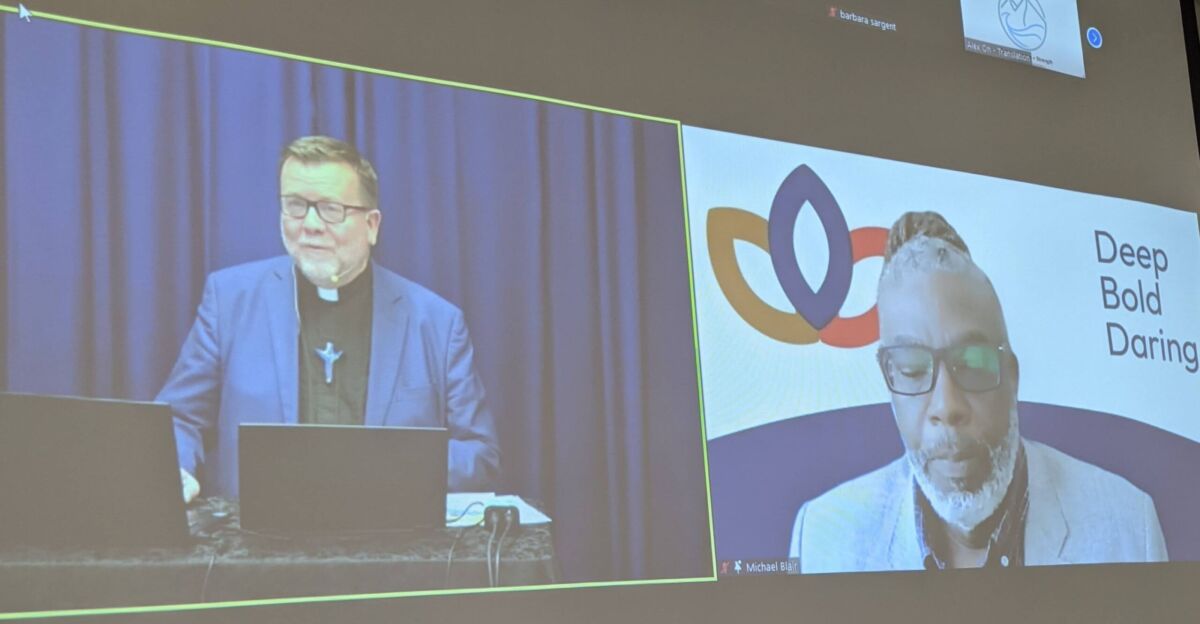 The Rev. Blair expressed his deep appreciation for the PCC’s confession to LGBTQI people and the work that the General Assembly is doing around racism. He said, “Many of the issues you are working through are issues that we in the UCC continue to work through. As siblings in Christ, committed to living in the reality of God’s beloved community, may we be able to address some of those challenges as partners. God bless you as you continue your deliberation and thank you for the opportunity to be with you.”

The full presentation here is available for viewing here

Report of the Assembly Council

The convener’s introduction is available for viewing here

The Assembly Council has a coordinating role in the church as well as a responsibility for financial matters under the authority of the General Assembly.

In response to the Moderators’ statement regarding the graves of 215 children at the Kamloops Indian Residential School in British Columbia, and with the knowledge that many more would likely be found, an Honouring the Children Fund was established and $1,000,000 transferred into it. The report on this work can be found in the Life and Mission Agency report and the Assembly agreed that resources produced by the Life and Mission Agency in Healing & Reconciliation be recommended to the wider church for education.

Congregations were urged to review their digital files and apply records management standards to them as they would physical records, and to take part in the Web Archiving Program offered through the Presbyterian Church Archives to preserve material that is posted online to websites or social media pages.

The Assembly adopted recommendations that will create a national registry of ministers and congregations that are willing to conduct and host same-sex weddings.

The Assembly adopted procedures and policies to be used when a congregation decides to withdraw from The Presbyterian Church in Canada.

A minute of appreciation was offered for the 24 years that the Rev. Stephen Kendall served as Principal Clerk of the General Assembly. Stephen provided strong leadership and pastoral guidance through our church’s participation in the Residential Schools Settlement Agreement and the Truth and Reconciliation Commission. He worked diligently on the church’s process for considering the remits that ultimately gave the church two definitions of marriage.

As the denomination’s Ecumenical and Interfaith Officer, Stephen forged strong connections with various ecumenical councils and events, including the World Council of Churches and the World Communion of Reformed Churches.

Stephen’s loyalty to the PCC, rooted in his faith in Jesus Christ and his appreciation of solid theology, ecumenical connection and unity remains strong. 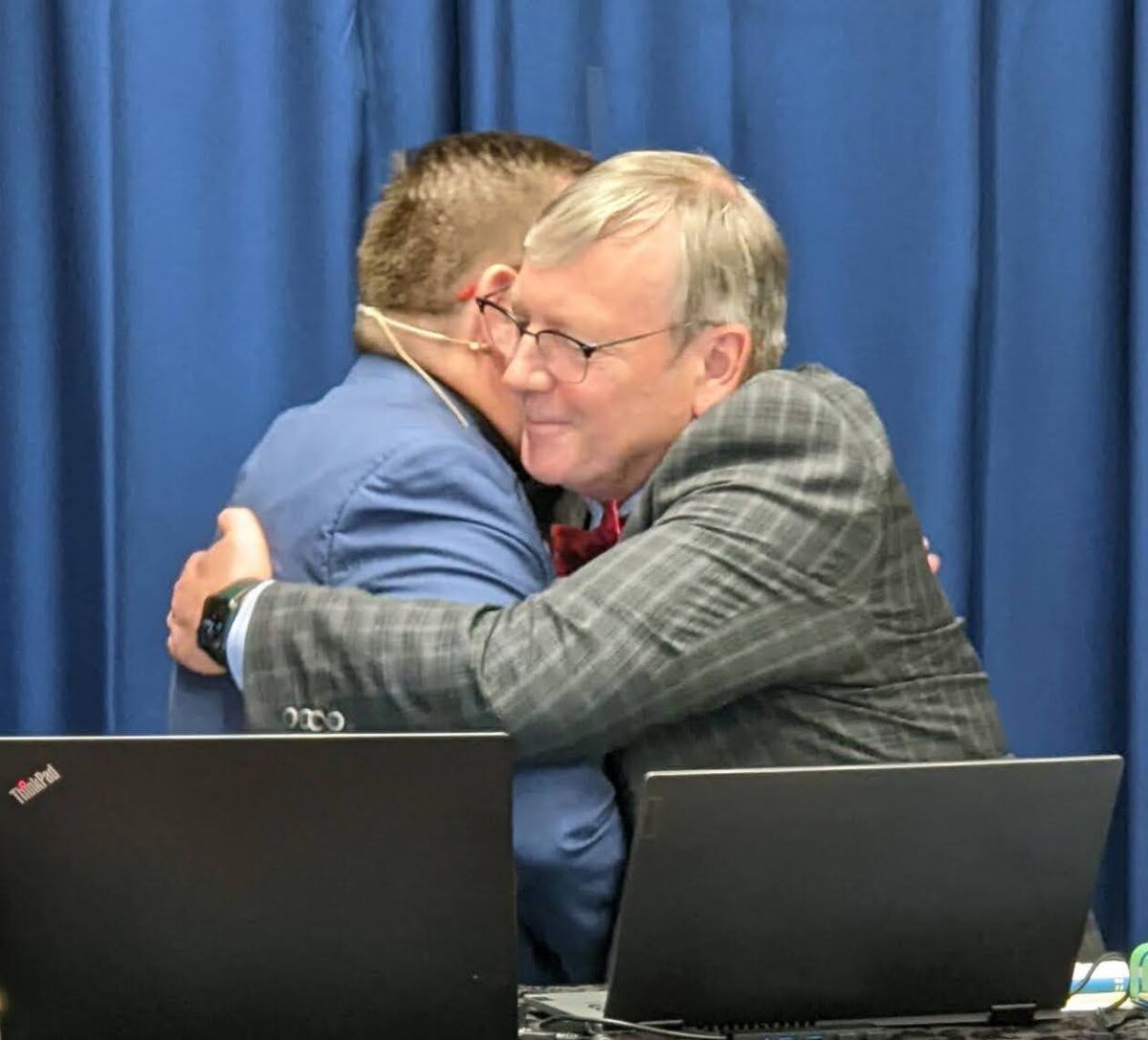 The Moderator, the Rev. Dr. Bob Faris, gives his best wishes to the Rev. Stephen Kendall on his retirement from the position of Principal Clerk.

The Rev. Victor S.J. Kim was appointed as Principal Clerk of Assembly. His deep faith, hope for the future of the denomination and grasp of the role were highlighted. In ministry, Victor has been active in his community, both in Richmond and Calgary, with interfaith organizations as well as ecumenical coalitions working for justice and dignity for all people. The Rev. Kim will begin in the position of Principal Clerk on July 1, 2022.

Report of the Clerks of Assembly

The Clerks of the Assembly are appointed to serve and strengthen the courts of the PCC through the preservation and promotion of the denomination’s polity.

The Assembly affirmed that ministers and congregations are free to set wedding policies that follow either of the two definitions of marriage, but that when a same-sex couple requests marriage by a minister who does not conduct same-sex marriages or to be married in churches that do not host same-sex weddings, the couple will be referred to a minister or congregation willing to consider conducting the wedding. Guidelines to facilitate calls and election of LGBTQI candidates and considerations regarding marriage were commended to Sessions, congregations and presbyteries.

The Clerks of Assembly will begin facilitating online voting for the nominee for Moderator of the 2023 General Assembly.

Report of the Committee on Church Doctrine

The Committee on Church Doctrine considers and reports on all matters of faith and order, to which the General Assembly refers, or on issues that are important for the church to consider in its life and witness.

The work that has been done over the years by the Committee on Church Doctrine, the Life and Mission Agency and the Rainbow Communion on the topic of gender and full inclusion will be gathered for the use of the church. An additional motion was adopted to change the title of the document, “Physician Assisted Suicide,” to “Medical Assistance in Dying (MAiD).”

Report of the Committee to Nominate Standing Committees

Thanks was expressed to all those who serve on standing committees of the General Assembly.

Report of the Pension and Benefits Board

The Pension and Benefits Board administers the PCC Pension Plan, Group Benefits Plan and other benefit programs on behalf of the General Assembly.

Starting July 2022, the mental health provision under the PCC’s group benefits will increase from $300/year to $700/year, and the practitioner list was expanded.

Report of the International Affairs Committee

The International Affairs Committee draws attention to international affairs and situations of injustice with a global perspective and suggests how the church can respond in ways that speak out against and disrupt systems that oppress and hurt people and creation.

The Assembly encourages Presbyterians to: learn about the Love My Neighbour campaign in support of global vaccine equity; study the complexities of food systems and advocate for governmental policies that protect the human right to food; promote climate resilient food systems to support small-scale growers; improve food security; address the climate crisis; protect biodiversity; increase gender equality; and learn about how we can access and use more ecologically sustainable and ethically produced food.

Congregations are also encouraged to use template letters available on the Social Action Hub as models to write personal letters to members of the Government of Canada about the State of Israel’s occupation of Palestine, and to support Palestinian farmers and olive tree planting through the Olive Tree Project through Gifts of Change.

Report of the Committee on History

The Committee on History believes in the importance of preserving Presbyterian history across the country, and works to encourage an interest in and awareness of the denomination’s history.

Congregations are encouraged to celebrate Heritage Sunday on February 19, 2023, or on another Sunday, as a means of celebrating the unique faith journey and heritage we enjoy as Presbyterians.

The winners of two history prizes were recognized:

The YARs reported that they were active with voting and coming to terms with the terminology of the General Assembly. They engaged in discussions on environmental protection, affordable housing, ministry and the reports presented. While saddened that they couldn’t meet face-to-face, they were grateful for the learning opportunity this experience provided.

The full reflection from the YARs is available here.