Ballot for Moderator of the 2022 General Assembly

Ballot for Moderator of the 2022 General Assembly 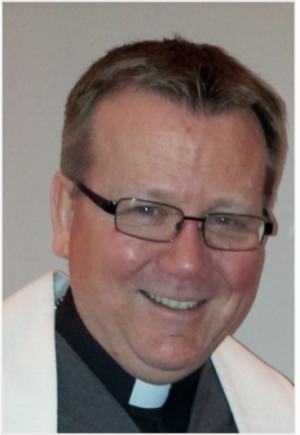 I am pleased to announce that the Rev. Dr. Bob Faris, Associate Minister of St. Andrew’s Presbyterian Church in Toronto, Ont., is the individual who has received nominations from more than one presbytery to be Moderator. He has agreed to stand in nomination.

Normally, ballots with the names of all nominees with more than one presbytery nomination, and who have agreed to stand, are sent to presbyteries for members of presbytery to vote. Ballots will not be needed this year.

The Committee to Advise with the Moderator will meet in order to prepare a recommendation for the 2022 General Assembly.

The 2022 General Assembly is scheduled to convene Sunday, June 5, 2022. The Assembly Council will meet on January 19 to confirm the format of the Assembly.

The following interview was printed in the Spring 2022 edition of the Presbyterian Connection newspaper.

Bob is a lifelong Presbyterian who has an ecumenical spirit and openness to the new thing that God is doing. This has included more than 35 years of innovative ministry within the PCC that has been focused on understanding and working toward the improvement of lives and communities negatively affected by social injustice and colonialism.

Raised in Newmarket and Sarnia, Ontario, Bob completed his undergraduate studies at Queen’s University. Both his parents were elders and Bob felt called to ordained ministry early in life. His involvement in the Presbyterian Young People’s Society and Camp Kintail led to his ordination to camping ministry as the first fulltime director of Kintail in 1984. His creative ministry influenced a new generation of leaders and helped set Camp Kintail on a path toward becoming a model of church camping.

After receiving an M.Div. from Knox College, he worked for some time with a congregation in Hamilton where issues of child poverty were part of the ministry. His passion for the life of the global church was fed at New College in Edinburgh, where Bob completed an M.Th. in 1987, then responded to a call to serve with the Presbyterian Church of Mozambique as a professor at the Seminário Unido de Ricatla. He was the first Canadian Presbyterian to be appointed to Mozambique. After language study in Brazil, Bob spent six years in the context of Mozambique’s civil war as well as the ending of apartheid in neighbouring South Africa. His admiration for the courage and witness of Christians in Mozambique in the face of immense violence and poverty informed his doctoral thesis at the University of Cape Town, which was published with the title, Liberating Mission in Mozambique: Faith and Revolution in the Life of Eduardo Mondlane. His experience in southern Africa also opened his eyes more fully to the legacy of colonialism in Canada and particularly to the catastrophic harm done to Indigenous peoples.

The Presbyterian Church in Canada has benefited from Bob’s academic work and teaching. He has taught courses in pastoral ministry and mission at Knox College and accompanied students to Cuba. In the lay education program at Knox College, he taught a course in spirituality and politics.

Bob has been a key ecumenical leader at a time of significant challenge and change. He was Director of the Canadian Churches’ Forum for Global Ministries and the Churches’ Council on Theological Education in Canada. He also served on the PCC’s Church Doctrine Committee and was convener of both the Ecumenical and Interfaith Relations Committee and the Cutting Edge of Mission Committee. He chaired the Board of Cooperation Canada Mozambique, was a member of the Governing Board of the Canadian Council of Churches, was a delegate to the Uniting General Council of the World Communion of Reformed Churches, and accompanied the Moderator’s visit to Lebanon, Israel and Palestine in response to the KAIROS Palestine document.

In 2011, Bob was called to St. Andrew’s Church in downtown Toronto. He shares in worship leadership, coordinates Out of the Cold and Refugee Sponsorship programs, has provided innovative leadership in adult education and has fostered a partnership relationship with Marabella Church in Trinidad. He has had a significant role in St. Andrew’s growth among a younger demographic living in condos and working downtown and its deepening commitment to being an intercultural and inclusive congregation. He has also taken a leadership role in the Presbytery of East Toronto.

Bob has taken some time to reflect on the year ahead and on some of the matters he would like to focus on while Moderator. Relationships are at the forefront in his mind, especially in two different but connected themes. First, Bob spoke about the importance of working toward new relationships with Indigenous people.

“Truth-telling around the experience of Indigenous people and the church’s history in Canada is of highest priority for the church’s attention.” He hesitated to move too quickly to use the word reconciliation because there is still much truth-telling yet to be done. “Telling the story is how we forge new pathways,” Bob said.

Second, the church’s work toward inclusion of LGBTQI2+ people is important for Bob, who said, “We still have a long journey ahead of us on that front.”

Bob served as co-convener of the General Assembly’s Special Listening Committee re LGBTQI, known as Rainbow Communion. As a gay man, Bob has experienced the harm done to people who identify as LGBTQI2+ in the church. He has sought to live with integrity, while calling the church to change its doctrine and practice that has diminished and harmed God’s beloved LGBTQI2+ children. He rejoiced when last year’s General Assembly adopted the remits that allowed for same sex marriage and the ordination of people in same sex relationships as well as all the recommendations brought by the Rainbow Communion.

Bob doesn’t believe that the church is beyond the divisions around sexuality and inclusion and knows that important discussions will continue to be part of the conversation that the church is having. “But decisions have been made and we are in the place where we are working out what it means to be the church with these new decisions,” he said. “It is hard work, but it is where we are called to be. I hope we can still listen to each other and all the perspectives among us, recognizing that some of the voices we will hear now will be new.”

Bob sees these two focuses as part of the larger issue of inequality and injustices in Canadian society and globally. He says that the church needs to understand the reality of injustices from a biblical and theological perspective and recall scripture’s focus on God’s call to justice.

Reflecting on the decision that the General Assembly will again meet online this year, Bob noted that meeting in person encourages relationship building and a greater sense of community and connection. At the same time, he acknowledged that there are good things to be learned by the church that come from meeting online. “Meeting online does not need to limit our discernment; for some it made participation easier and enhanced their ability to contribute. It is good for the church to know that we can do both and look at hybrid models.”

Amid the many challenges and periods of grace experienced during the pandemic, Bob continues to look forward to responding to God’s calling and to sharing the journey into this new time that lays ahead for us all.