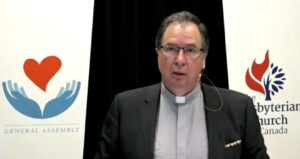 The second day of the 2021 General Assembly began with worship. After recognizing the traditional territory of where he is located, the Rev. Dr. Richard Topping, President and Vice Chancellor of Vancouver School of Theology, preached. Reflecting on Moses encountering God in the form of the burning bush in the wilderness, he called the church to reflect on its current experience, avoid the temptation to idealize the familiar or the past, and to look for the new life that is coming into the world. He reminded us that our hope in the wastelands is Jesus Christ.

The Rev. Dr. Daniel Scott, Moderator of General Assembly, opened the second sederunt by reflecting on the harm caused by Indian Residential Schools. He acknowledged the devastating discovery of the bodies of 215 children at the former Kamloops Indian Residential School and asked for forgiveness, wisdom and healing to end the ongoing harm before leading the Assembly through a time of confession, lament and moment of silence, observing 215 seconds in memory of the children.

Following this, Assembly directed the Moderator and immediate past-Moderator to write a statement and pastoral letter, in consultation with the National Indigenous Ministries Council, responding to the discovery of the remains. The unusual action of two moderators writing a letter underscored the importance of continuing to speak up and act for healing and reconciliation. The Rev. Amanda Currie noted that there will be more moments like this, so we need to continue to journey with Indigenous people on healing and reconciliation efforts. “Difficult but important work is needed…Our speech needs to follow with action.”

After much discussion, the Assembly decided to follow the process the Business committee had originally proposed and consider omnibus recommendations committee by committee, subject to amendment by majority vote of the Assembly. 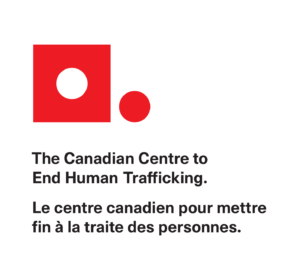 This year’s Cutting Edge of Mission Award was awarded to the Canadian Centre to End Human Trafficking. After Assembly heard an address by Julia Drydyk, Executive Director, Benita Hansraj, Director of Marketing and Communications, accepted the award.

Established in 2016, the Canadian Centre to End Human Trafficking was created to demand a national strategy for change and to mobilize collective action to end human trafficking in Canada. Ms. Drydyk explained that, “this is a crisis much larger than most Canadians realize,” and demands sophisticated, coordinated and integrated solutions.

In 2019, the Centre launched the Canadian Human Trafficking Hotline (1-833-900-1010) to provide an avenue for victims and survivors to receive the specialized support that they need and for community members to report incidents of suspected human trafficking. The Centre continues to work with Canadian law enforcement agencies to develop referral and reporting protocols that are part of the anti-trafficking response network used by Hotline Response Advocates when assisting victims and survivors.

“Together, we’ve already made great strides,” Ms. Drydyk said. “We’re making a meaningful difference in the lives of survivors. Through education and advocacy, together we can bring an end to this crime.”

A special committee of the 2021 General Assembly will consider two petitions calling for a confession of the mistreatment of ethnic minorities by the dominant culture in the denomination. The committee will report to the 2022 General Assembly. 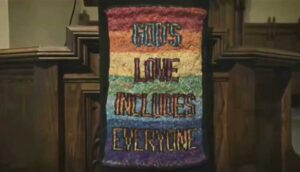 The Special Listening Committee re. LGBTQI, also known as Rainbow Communion, was established by the General Assembly in 2017 to respond to the call to repent of the harm caused by homophobia and hypocrisy in the church.

The moderator took a moment to acknowledge the courage of those who took time to share their experiences. He expressed pain in knowing that this kind of hurt took place in our church and pointed out the need for a journey of healing both for our church and for those who have been harmed within it.

The report was presented by the co-conveners, Sue Senior and the Rev. Bob Faris. It shares stories the committee had heard recounting harm done because of homophobia, transphobia, heterosexism and hypocrisy in the PCC to LGBTQI people and others. It also includes stories of grace received in the face of challenge. Most stories were told in Listening Spaces coordinated by the Rainbow Communion in locations across the country.

Ms. Senior and the Rev. Faris explained that of the 139 stories shared, many were from people who were harmed within and by the church. They did not feel welcome, but instead too often felt ostracized and shamed for who they are.

Gratitude was expressed by commissioners to all who told their stories, and the Assembly affirmed that all people, whatever their sexual orientation or gender identity, are equally beloved by God.

By adopting all recommendations from the Rainbow Communion, Assembly encouraged congregations to provide opportunities for all to offer their gifts in worship in the life and ministry of the church. It also agreed that identifying as LGBTQI and/or being in a same-sex marriage is not grounds for discipline and censure in The Presbyterian Church in Canada.

The Presbyterian Church in Canada will offer a public confession to all individuals and congregations harmed by the church through exclusion and marginalization, seeking forgiveness from God and from all those affected. Resources will be created in the coming years to equip an inclusive church and a fund will be established to support psychotherapy/counselling for those who have experienced harm done by homophobia, hypocrisy, transphobia and heterosexism in the denomination. 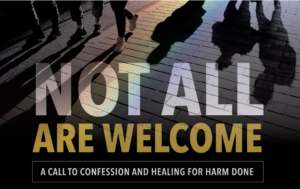 As part of the report, a poignant and painful video summary of the shared stories was presented using voice actors to protect anonymity. The video included stories of people receiving covert messages of hate, living with shame, depression and guilt for who they are and feeling less than whole. They spoke of a pervasive, subtle transphobia, bullying, and feeling betrayed by the people they thought loved them. The moderator thanked all those who had the courage to share their stories.

An additional motion was approved that the moderator write letters of apology to the Rev. Darryl Macdonald and St. Andrew’s Lachine (through Summerlea United Church), who publicly shared their experiences through the Rainbow Communion report.

The moderator ended the day’s proceedings in prayer for an inclusive church. He acknowledged that it’s been a difficult day, dealing with and hearing about difficult situations. It included hearing from Indigenous friends and neighbours, discussing the pain of ethnic communities, and watching the Rainbow Communion video that detailed harm and pain experienced by so many.

The moderator asked for a spirit to welcome all people with love so that the church may never exclude, but instead include the love of Jesus who came to save us all. He ended with the Lord’s prayer.