Tim Herron presented the Trustee Report. The Trustee Board oversees the over $450 million of funds of the Pension Plan and Consolidated Portfolio. These funds support the pensions of professional church workers, and the mission and ministry of the national church and congregations. The Investment Advisory Committee assists the Trustee Board by receiving fund manager reports, meeting with fund managers and making recommendations to the Trustee Board. The report states that while 2018 markets were the most volatile since 2011, they have rebounded in early 2019. 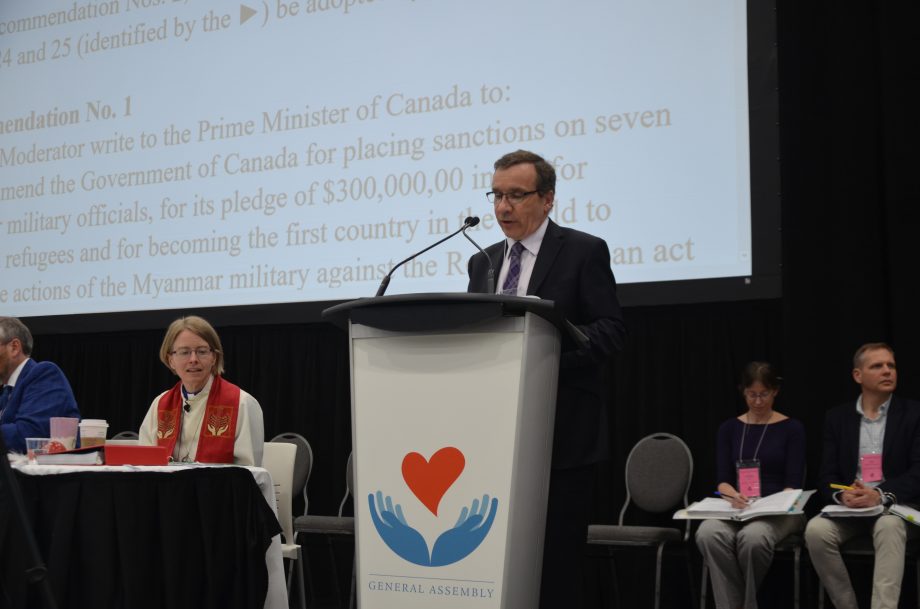 The Rev. Dale Henry presented the report of the International Affairs Committee. The Assembly encouraged congregations to respond to the Rohingya Crisis by supporting the efforts of PWS&D to minister to Rohingya refugees and that the moderator write to the Prime Minister of Canada to commend the Government of Canada for its response and encourage it to increase aid and work closely with the United Nations to help provide for Rohingya refugees. The committee also presented actions that congregations and the moderator should take about the plight of marginalized people in southern Cameroon, including recommending a third-party mediator like the United Nations or the African Union to mediate the situation on neutral ground.

Considerable work was done by the Committee on environmental issues, especially as related to plastics. Congregations were encouraged to reduce their use of plastics and encourage their municipal governments to do the same, and to encourage the Government of Canada’s continued action on climate change as well as take immediate action to reduce the Canadian contribution to carbon emissions.

The Assembly adopted the following recommendations about religious persecution:

The Assembly also agreed to urge the Government of Canada to increase its official development assistance to 0.35 percent of gross national income by 2020.

Recommendations were adopted to endorse the No Way to Treat a Child campaign and to write to the Government of Canada requesting the government to condemn the mistreatment of Palestinian children brought into the Israeli military court system. The report also covered the important work of Arms Trade Treaty, Canadian involvement in peacekeeping, supporting the people of Taiwan as they seek to live and serve in a peaceful democracy and the plight of migrant workers. 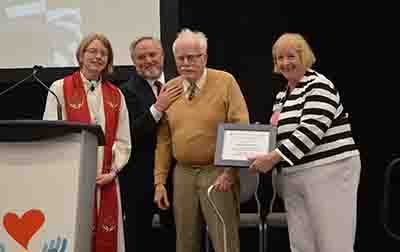 The Rev. Geoff Ross (convenor of History Committee) presents the history prize in memoirs to Donald MacLeod for his book, “China Mishkid, My Life as a Missionary Kid in China (1938–1955)”. Also pictured Moderator, the Rev. Amanda Currie (far left) and Marilyn Repchuck (convener of the National Presbyterian Museum Advisory Committee)

The report was presented by the Rev. Geoff Ross. Prizes were awarded to the following books this year:

Congregations were encouraged to celebrate Heritage Sunday (on or near February 16, 2020), to maintain good records and donate to the National Presbyterian History Museum regularly. The Assembly recognized the clergy and church workers who retired this year.

Presented by David Phillips, the MacLean Estate report recognized the diversity in the people programs that Crieff Hills Retreat and Conference Centre provides. They are particularly looking forward to increasing their focus on the environment. All are invited to visit.

The Rev. Don Muir, Deputy Clerk of Assembly, reported on the work of the clerks in the past year. Recommendations were adopted by the Assembly to make changes to section 108 of the Book of Forms about term service for eldership and affirmed that elders cannot be removed from the session without their consent, even if they have physical or mental infirmities. There is no limit of elders that a session can have at any time.

The Committee to Confer recommended names of commissioners, as well as a Young Adult and Student representatives and the Clerk,s as consultants to the newly formed Committee on Pathway Implications Committee to work on the remit which may be sent down for consideration under the Barrier Act on Pathway B (Inclusion). They will report back to a future sederunt.