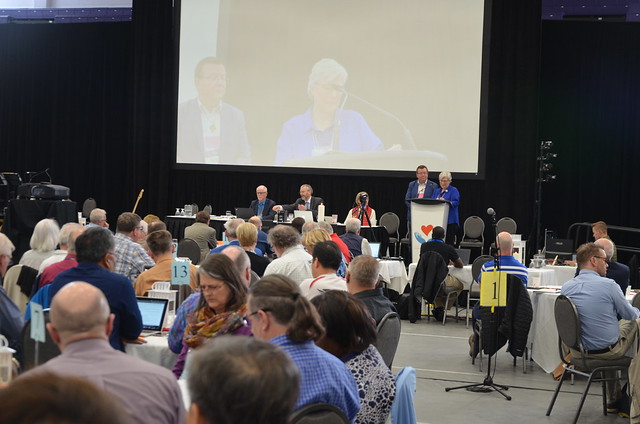 The Rev. Dr. Robert Faris and Sue Senior presented the interim report of Rainbow Communion, the Special Committee re. Listening (LGBTQI people). LGBTQI is an acronym used to refer to people whose sexual orientation is not heterosexual and/or whose gender identity does not conform either to binary male/female categories or the “assigned” gender at birth. LGBTQI: Lesbian, Gay, Bisexual, Transgender, Queer or Questioning, Intersex.

The Rev. Faris explained that over 100 stories have been shared with Rainbow Communion, coming in from every province in the country, from a wide diverse group of individuals. “We now carry these stories with great care and respect.” Sue Senior explained that the Moderator’s Letter of Repentance of February 2018 is a “beacon of hope” for many people. The moderator read the letter to the Assembly. A brief moment of silence followed by prayer was had for all those who lost their lives due to feeling rejected, alone and experiencing despair, and their families.

After hearing an overview of the work of the Rainbow Communion and watching a short video presentation, the Assembly agreed that courts and bodies of the church be urged to give public expression to the Moderator’s Letter of Repentance, and to seek ways to live out that repentance for harm done and that continues to be done to LGBTQI people and others as a result of homophobia, hypocrisy, transphobia and heterosexism in The Presbyterian Church in Canada, including developing discussion spaces with leadership drawn from a diversity of people.

The report of the Rainbow Communion will conclude at a future Sederunt.

The Rev. Daniel Cho reflected on his year as the 2018 Moderator of The Presbyterian Church in Canada. A slideshow of images highlighted PCC congregations and individuals, with a particular focus on youth and the future of the church.