Update from General Assembly: Recognizing the 25th Anniversary of the Confession

Update from General Assembly: Recognizing the 25th Anniversary of the Confession 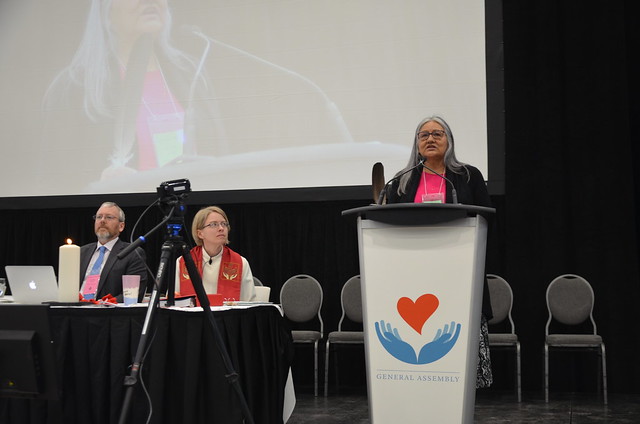 Following a smudging ceremony, the Assembly took time to highlight the work of healing and reconciliation, and acknowledge the 25th anniversary of the 1994 Confession to God and Indigenous people. The Rev. Stephen Kendall, Principal Clerk, spoke of the country’s difficult and painful history with Indigenous peoples, and the church’s involvement in this legacy.

Guest speaker Terri Brown, Chief of the Tahltan Band in Northern British Columbia, a residential school Survivor, addressed the assembly. She acknowledged the four other Survivors who were visiting. She had a candle lit in memory of the missing and murdered Indigenous women and girls, as well as all the children who died in residential schools and never got to see their families again. Having been taken from her family as a child, as well as her siblings, Ms. Brown spoke of the difficulty in sharing her past and memories, and the terrible impact this has had on her life and the lives of so many other Indigenous people. “Our people have suffered the worst treatment at the hands of those who loved Christ… How do we reconcile that?”

The Rev. Ian Ross-McDonald, General Secretary of the Life and Mission Agency, and some of the Young Adult Representatives named the residential schools operated by The Presbyterian Church in Canada and showed archival images. Members of the National Indigenous Ministry Council gathered on stage and a song was offered by the Rev. Dr. Stewart Folster, from Saskatoon Native Circle Ministry, that sang of the tragedy and long-term consequences of residential schools. The Rev. Margaret Mullin, Thundering Eagle Woman, introduced a time of sharing circles for commissioners. Commissioners were encouraged to talk to one another about what the Confession means, thoughts and feelings around the Confession, and discuss acts of reconciliation.

Congregations and church groups can live out the Confession by studying the resource Equipping for Leadership: A guide for churches to respond to the Truth and Reconciliation Commission’s 94 Calls to Action, and copies are available through the online order form. The resource empowers groups to read, reflect and act on the Calls to Action by choosing one or two of the Calls to focus on.